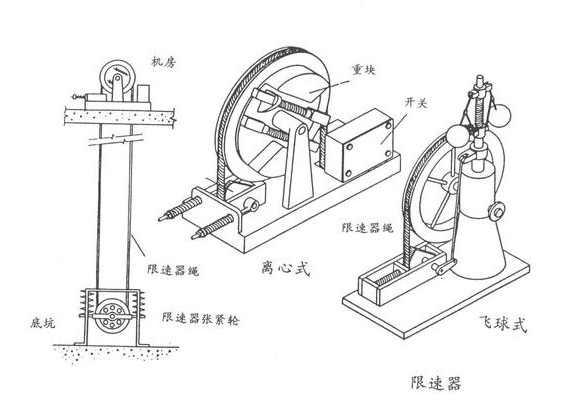 Some of the operations, judgments, and processing methods that were introduced during the actual detection of the elevator's safety component governor were proposed to be discussed with the great gods of the industry. 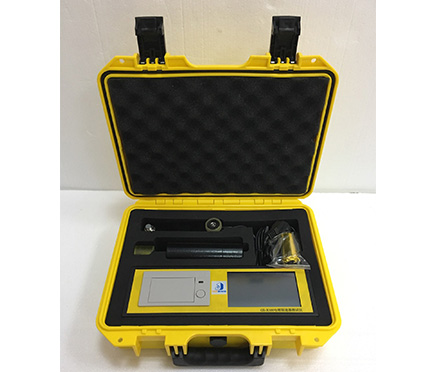 Speed ​​limiter field test actual operation process
Tester's code:
It is forbidden to intervene in operations that are not related to the data detection of the speed governor, and objectively measure the speed governor data and input it into the speed limiter tester to operate. Detect and acquire the data information of the electrical switch and mechanical action of the governor. The subjective operational errors are reduced to zero.
Prepare for testing:
1 check
a) The model number, production number, and rated speed on the nameplate of the governor are consistent with the application form;
b) Check that the governor's certificate label is intact, the base is fixed, and the electrical switch is flexible;
c) Check the appearance of the speed governor to be clean, free of oil, seals, and paint seals intact;
d) Check that the main power supply of the elevator is cut off, and the sheaves of the wire rope and the governor are safely disconnected;
2 operation:
a) Connect the test switch's electrical switch test line to the electrical switch terminal;
b) Connect the testing instrument to the 220V power supply, measure the nodule diameter of the wire rope and the sheave, and calculate and determine the perimeter;
c) Turn on the switch, touch the keyboard of the instrument, and input the perimeter, muzzle velocity, wheel number, and then press the reset key to use.
d) Attach the magnetic beads to the slot wheel nodule with the mark facing outward and the Hall probe is placed at a stable position from the magnetic ball 8-10MM;
e) Touch the start button to test if Hall has magnetic beads. 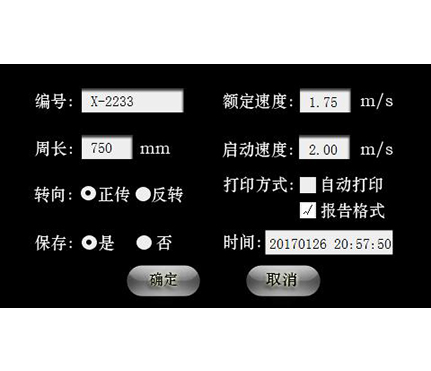 3 tests:
a) The motor rubber wheel that will be turned after starting, touch the unilateral side of the governor of the governor, make it rotate at a constant speed and accelerate to the feedback data to reach the rated speed of the governor;
b) Touch the instrument test button to enter the data detection and recording stage;
c) continue to make the motor accelerate in order to make the electrical switch action, mechanical action, repeated the electrical switch and mechanical action data twice after printing the electrical switch and speed limiter of the speed limiter to normal;
d) Press the reset button and repeat 1-2 operation twice. Complete data collection work;
e) In the event of maintenance of the governor, maintenance issues should be indicated and corrected at the site.
Note:
(speed limiter detection detailed process)
(a), collecting data
1. Enter the equipment room to open the test equipment box and request 220V AC power supply;
2. Collect and input the data of the governor circumference (millimeter) of the speed governor to be measured; (Acquisition method: measure the distance between two steel ropes' outer edges - diameter of wire rope × 3.14), muzzle velocity (mm/s) (restricted) (Speed ​​rated speed +50～100) and the detector motor drive wheel number (large wheel 2002/small wheel 2001), press the reset button; 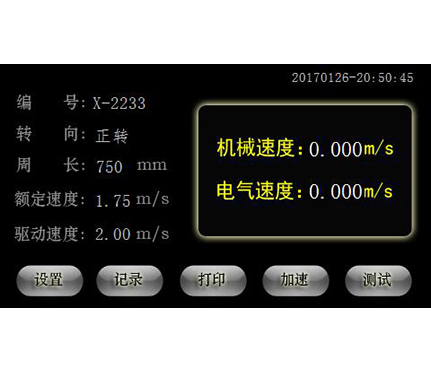 (B), with the preparation
1, check the speed limiter model, action direction. Please maintain the elevator to the second floor, cut off the power supply;
2. The maintenance personnel enters the pit to lift the tensioner wheel, and the car top maintenance personnel cooperates with it to transfer the steel rope upwards. The steel wire rope of the speed limiter is clamped from the upstream crossing and is completely removed from the sheave by the pliers. After opening, the wire rope clamping the steel rope to the speed governor at the down crossing with a pliers is completely disengaged from the sheave and can be freely rotated;
3. Place a magnetic steel mark on the outer surface of the sheave at right angles to the outside, and place the sensing probe plane 8-10 mm away from the magnet;
4, the speed limiter tester electrical switch connector access speed limiter electrical switch on the line column to be used.
(three), test operation
1. Lightly press the start button, hold the rotating motor with both hands and make sure that it rotates passively downwards. Observe that the speed of the sheave measured by the sensing probe reaches the muzzle velocity. Press the test key for passive sheave acceleration.
2 When the speed reaches the speed of the electrical switch, separate the power line from the electrical switch. The motor continues to rotate and accelerate until the mechanical operation is hindered. (Pressure rope hammer should be used to measure the instrument. After the feedback signal is given in operation, the printer of the tester will automatically print out the data of the two operation speeds of the electrical appliance and the machine, and then press the repeat key repeatedly to repeat the printing of the electrical and mechanical two speed data. Repeatedly repeated 5, 6 clauses. 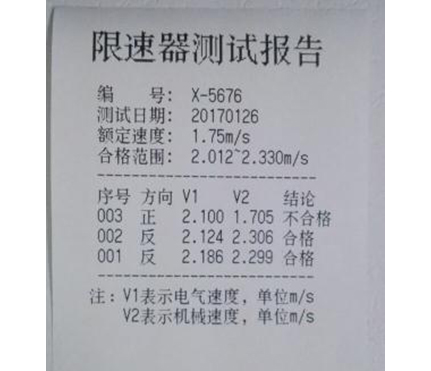 (d), the end of the test
1. Remove the magnet from the sheave and place it on the grooved wheel first, and then remove the clamp of the steel wire rope according to the two to four operation methods.
2, inventory management tools. The inspection work is completed.
3, the maintenance personnel shall check the safety work of the elevator in accordance with "inspection regulations" and resume operation.
4, test personnel exit the scene.
4, the speed limiter detection is not up to the standard:
1) Use the speed limiter detector to turn the speed test data for the first time. The non-compliance criteria should be recorded as data;
2) Use the speed limiter detector to continuously turn the speed test data for three consecutive times and judge that the data is not up to the standard. The data should not reach the standard. A deadline correction test notice should be issued on the spot, and the elevator inspector suspends the lift supervision and inspection work. , to be subject to deadline adjustment, corrective repairs and re-tested and then resumed supervision and inspection.
5, for the speed limiter detection data does not reach the standard processing method:
1) After the elevator manufacturer and elevator maintenance unit dispatches professional personnel to adjust, correct and repair, and apply for re-inspection;
2) Application for re-inspection by the user and the maintainer jointly applying for entrusted professionals to perform adjustment, correction and repair services;
3) Care must be taken in correcting and repairing the governor in the field.
6, for speed limiter detection unqualified determination and processing methods:
1) If the test data after calibration is still not up to the standard, the speed limiter is initially judged to be unqualified, and the leader of the lift inspection quality is in charge of issuing a deadline adjustment/repair notice or replacement according to the actual situation. During this time, the elevator must stop running.
2) The speed limiter for which the detection data for the first time is not up to the standard must be re-inspected within three months after the inspection. The re-examination of the first-rotation detection data again fails the standard and reports to the elevator inspection quality leader. According to the actual situation, the deadline for adjustment, correction, repair / replacement of knowledge. During this time, the elevator must stop running.
7. Understanding of the concept of maintenance, maintenance, adjustment, correction and repair of speed governors
maintain:
Cover the governor over the governor. The governor without cover must define the safety range and keep the speed governor clean.
maintenance:
Periodically clean the putty dirt of speed governors and steel ropes, add multi-purpose grease to the rotating shaft, add lubricant to the drive shaft, add inhibitors to the suppression parts, clean the sliding parts, and smooth the frictional damage and Poorly rotating shaft spray rust remover for cleaning;
Adjustment:
Adjust the position of the electrical switch of the speed governor, adjust the flexibility of the electrical switch arm, adjust the striking screw, and adjust the flexible ball to adjust the impact, and adjust the fine adjustment screw of the pendulum and the drive axle of the pawl.
Correction:
The correction of the moving skateboard, the cleaning and adjustment of the pendulum shaft, the transmission arm, the detent shaft, the balance correction of the pendulum and the pawl bridge, and the adjustment of the gap between the electrical switch and the mechanical movement speed.
repair:
Mechanical mainspring adjustment, replacement, positioning, sealing of lead; removal and adjustment of rotating or stopping parts; disassembly of main rotating wheel and adjustment of main and auxiliary springs; adjustment of electrical switch of ultra-high speed elevator speed limiter. 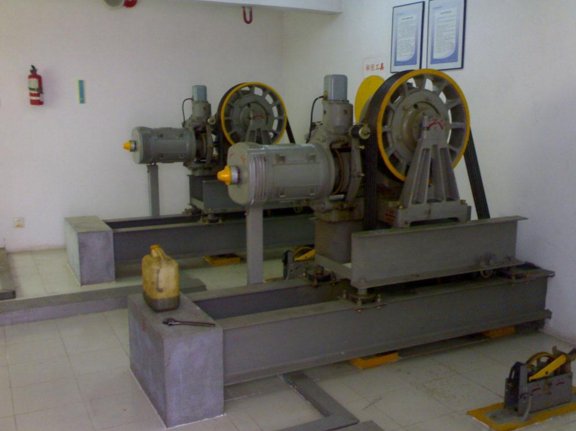 We carry high quality Speed Governor as below

for all major elevator and escalator brands as below